At the beginning of July I had to finally say goodbye to my dog buddy Guinness. He was born a few days before I turned 21 and I had him as a very young pup via the vets where I worked as a nurse, so he has been my companion for most of my adult life. 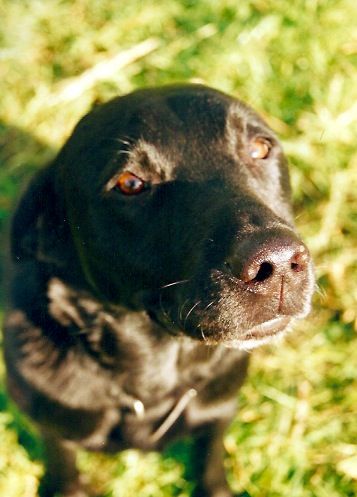 Although I grew up with Black Labradors and my childhood was spent with one or other of these amazing dogs, Guinness was the first dog that was my own and he was special. We got our first Black Lab – a female called Sophie – when I was around 2 yrs old so I don’t remember life without dogs and she died when I was 18 and the following year our other Lab died. So in all, I’ve only known 2 years when there hasn’t been a Black Labrador as part of our family. It’s not as though we don’t have other pets; we have many! And we’ve had several collies alongside the labs. But often a particular breed just “fits” – with you, your life and personality and for me that’s these gentle, funny, slightly mad but always kind retrievers.

I knew as Guinness aged that I would have another at some point. But unlike when I was a child and we had two or sometimes three Labs together, I always said there was only room for one Black Lab in my heart at a time and that Guinness was irreplaceable and I couldn’t get another just because I knew that one day he would have to leave us. We also have our lovely three-legged collie Badger anyway so it’s not as though we didn’t already have canine company. When that sad day came a few weeks ago, despite the inevitability, I thought it would have to be a while before I could find another friend to share my life with. But life has other ideas sometimes…

The next few days I saw labradors everywhere. They’re a popular breed of course so they do feature heavily on merchandising in rural areas! Every shop window had labrador mugs, tea towels, aprons, mats. Every person I talked to seemed to have a well-behaved labrador at the end of a leash. Every passing car had that kind intelligent face poking out of open windows, silky black ears flapping in the slipstream. About 3 days after Guinness was put to sleep, the talented indie dyer and fellow dog lover Freyalyn re-tweeted a picture from a dog charity of a labrador that needed a home and I knew I was going to weaken sooner or later.

I held off for another week worried that it was rebound from losing Guinness, that it wasn’t sensible, I was busy travelling around for family reasons. But just before I went away to stay with my brother for a weekend, I showed the picture to my mum and she suggested I should contact them when I got back if I still felt the same. However once I’d left she emailed the charity herself and found out that happily he had already got a new home. But she also knew how much I was missing my old boy and that I find my daily walks empty without sharing them with a dog as both of ours have been too infirm to go on walks for some time. So she carried on scouring the internet for dogs that might need a good home. A lifetime of working for a vets practice means that I find myself unable to buy a dog – there are so many lovely animals out there that have lost their home or have been treated cruelly through no fault of their own. I just can’t bring myself to buy a puppy knowing that thousands of unwanted dogs in the UK need somebody to love them and keep them safe. Being adult and without the puppy cute factor, they’re harder to find homes for. A dog will repay you a thousandfold in terms of loyalty, companionship and affection for the work, time and money you put in – and rehoming dogs does require work as often their previous experiences have taught them humans can’t be trusted and it takes time and patience to show them otherwise.

When I got home Mum greeted me with the news that she’d been doing some doggy digging on my behalf. The lovely boy I’d seen had gone but she’d found another Labrador Crossbreed actually much nearer to home who’s owners needed to rehome him. We exchanged emails to talk about things, arranged to meet and the next day Mum and I went drove the 40-odd miles to meet Marley.

His owners had warned in their ad that he was an energetic dog that needed lots of exercise and space and the canine cannonball that shot in from the garden and bowled me over certainly fitted their description. Their family circumstances had changed and it was clearly a heart wrenching decision to find Marley a home where his needs could be met. I was almost in tears too – I can’t imagine having to rehome one of my pets and Marley was obviously a very happy and much loved dog. Luckily for me they decided that what we could offer was perfect for him and agreed that he could come and live in our family.

The first few days were a little bit stressful, he was obviously going to miss his home and family that he’d known from a pup (he’s now 4 years old).

I’ve rehomed so many animals but always ones that have been abandoned, are feral or have been cruelly treated so they’re always grateful for our love and a better life even if it takes time to persuade them they are now safe. Marley though of course had come from a happy home with loving owners, it must have been very confusing for him so I balanced trying to keep him calm and reassured with stimulating him with fun things to show him living with us is a good thing. 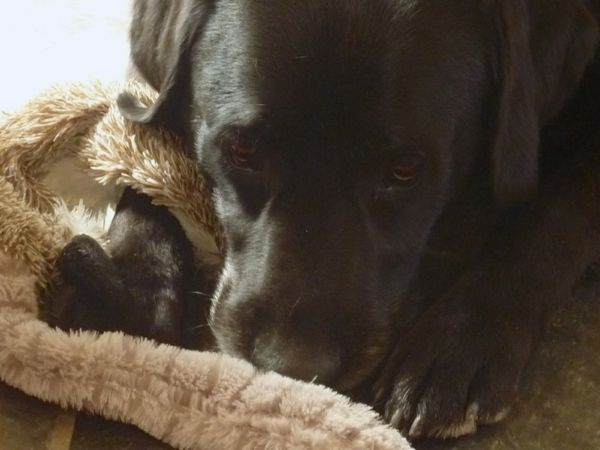 He has quite a strong personality so it took a bit of sorting out how to rein in his exuberance; he tends to the dominant which isn’t a good thing in dogs. Dogs need to understand that they are much further down the “pack” than humans but you don’t do this by force, it’s important to reinforce this with behavioural things that elevate your own position as pack leader and create order. So this meant teaching him that he doesn’t sit on furniture (because that is for humans), go through doors before people, eat before people and doesn’t initiate fun sessions of play or affection, it has to be a human that asks him to play not the other way around. These things seem so small and subtle that one wonders if it makes any difference at all but it’s about understanding canine behaviour and hierarchy and the communication they have themselves and interpreting them into dog/human interactions and it does work – really fast in fact. 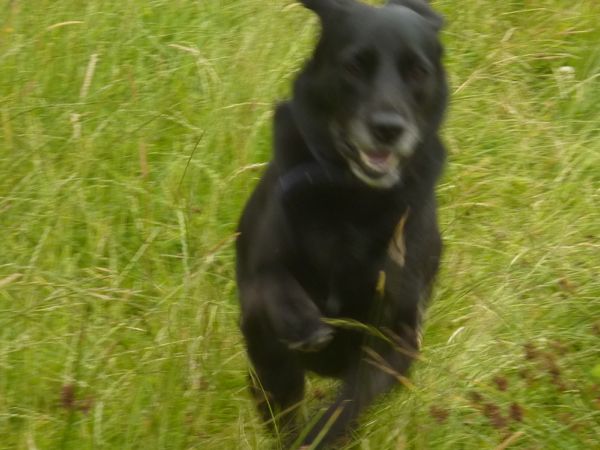 Gradually we established the pecking order and the bonus side of this kind of positive personality started to shine through. Marley is a fabulously smart dog, more so than most I’ve had. He’s so quick at picking up what you want him to do – the challenge is over-riding his own quite stubborn will and getting him to do what you want! In fact though he’s very willing to please and working on the principles of “exercise first, then training and then affection” he’s a joy to work with. His previous owners had put a lot of work into him and it shows. Of course living here on a farm is very different to what he was used to. He is wonderful with children and other dogs. Less so with cats because his previous cat companion actively encouraged playing and chasing which ours do not like one little bit! He doesn’t really understand this yet! He also has a very strong chase instinct like a lot of dogs. This isn’t a good thing in a sheep farming area but luckily I have my own animals I can “practice” on and so one of the first things was introducing Marley on a lead to some of the animals he’d never seen before. Like cows. 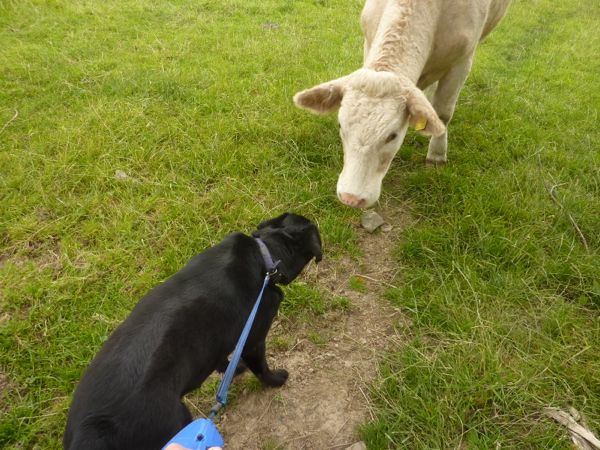 The pigs – he LOVES the pigs!

as well as my sheep and the ponies, chickens and other poultry. After 5 weeks we’re starting to get to the place where I can call him back when he’s off the lead although he really can’t resist rushing at them to start with and barks a bit so he’s still not OK with livestock out and about. It’s still early days though and I’m encouraged at how far he’s come with something that is such a powerful instinct in a dog.

One of the loveliest things is how helpful he wants to be. He likes being with me whether it’s whilst I’m working at my desk or in the kitchen or best of all outside. If I’m gardening he likes picking up weeds in his teeth, 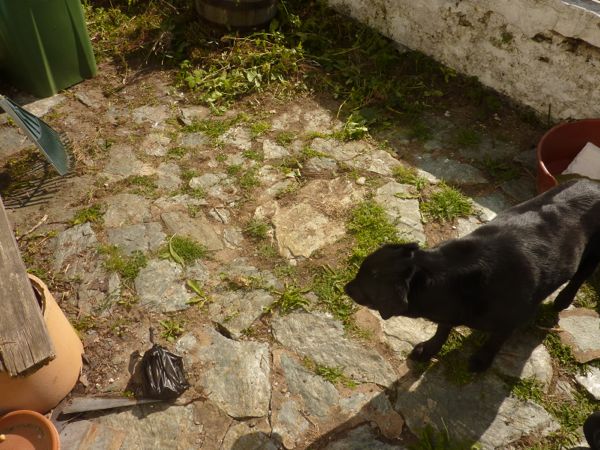 Fruit picking means tasty treats of soft fruit (he likes fruit and veg!). Working outside means that he gets to be in the fresh air and can run around if he gets bored. I suspect when I stack this pile of logs undercover later next month he’ll probably want to help carry them in. He likes copying my actions; he only has to see something once to “get it”. Sometimes this is funny and sometimes it’s a bit disastrous! 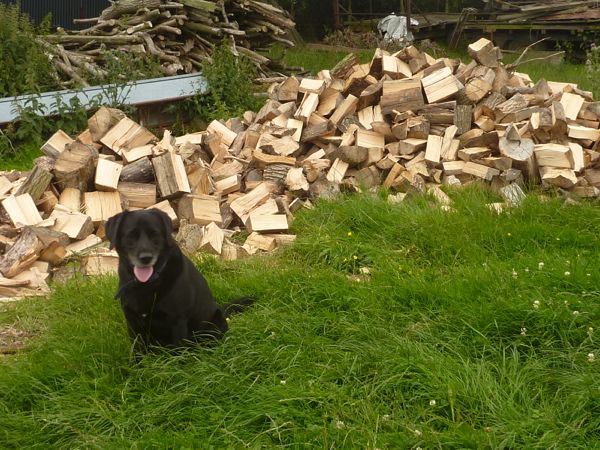 And then of course there is the real bonus of having a dog – someone to share those walks with. 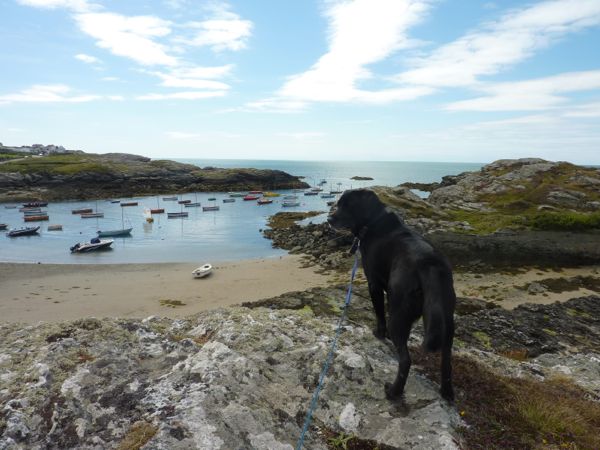 Whether at home or in Anglesey I now have a friend to trot alongside and make it more fun. Here was an 8 mile walk we did last week to look at some Sea Arches – the first is the Black Sea Arch or Bwa Ddu and the second, the White Sea Arch or Bwa Gwyn.

He loves the seaside especially. Lots of other dogs to make friends with and the sea to fulfil that marine retriever instinct to it’s maximum. Labradors were bred (in Newfoundland – not Labrador!) from the St John’s Water Dog, a breed that became extinct in the 1980’s that was bred to help pull fisherman’s nets from the cold sea. And Marley is at his happiest when he’s swimming around in the shallows, grabbing floating bits and pieces out of the salty water, whether it’s an abandoned anorak full of sand (he was very proud about that) or seaweed which has the added benefits of not only being smelly but also breaking up in a most satisfying way when you shake it in your teeth. He’ll race around on the beach flinging it up in the air and catching it until it’s smooshed to bits. And then go and find another piece to start all over again. If there is no flotsam and jetsam, kelp stalks or seaweed then a stone will do – he’s quite happy to swim out for a splash and come back again for a repeat performance! 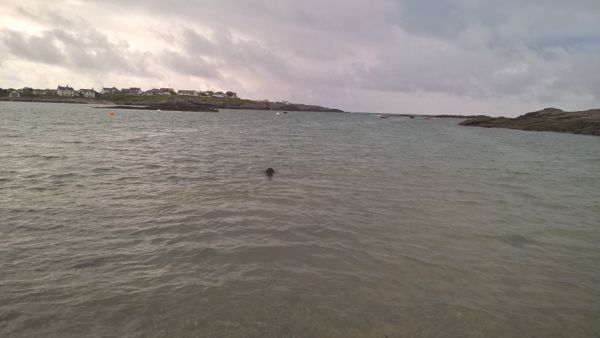 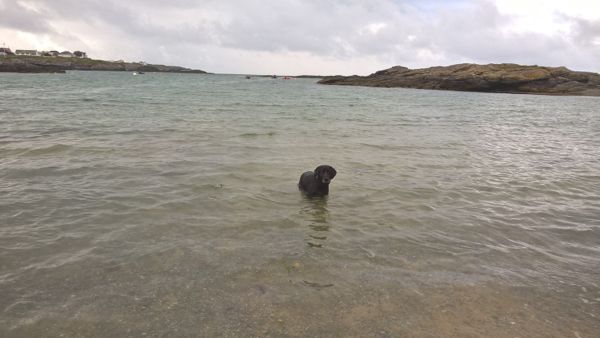 I think my favourite version of Marley though is Bedtime Marley. Once he’s had a day of running around and being busy, the evening he gets sleepy and goes onto his cushion to curl up. He wants to cuddle when he’s a sleepy boy and is less likely to run off with my socks or knitting – one of his few annoying habits!

I feel pretty lucky to have him. Both that Mum found him for us and that his previous owners were happy to trust him to us for a second life. I hope he likes being here too now and doesn’t miss his old home too much. I still miss Guinness every day but I’m happy to have a different dog friend to love in his own right.