Summertime… an’ the cotton is high…

So despite the decidedly dodgy weather suggesting otherwise, it’s Summer in the temperate climate of 52 degrees latitude up the Northern Hemisphere and the grass is romping away. If your lawn is your pride and joy you’ll know what I’m on about – you’ve just put the lawnmower back in the shed, turned around and before you’ve blinked the sweat out of your eyes, the freshly smoothed sward is wearing a distinct Five ‘o’ Clock Shadow across its grinning visage. The combination of long daylight hours, warmer (relatively speaking!) temperatures and rainfall mean that you can practically hear the blades of grass squeaking as they grow.

It’s bad enough when it’s your lovely lawn eating up your time but multiply that by several acres and you get a monocotyledon headache of mammoth proportions. This of course is turned to advantage in farming where a large part of agricultural produce in Britain comes from monocots in some form or other; the grain produced by arable farmers in fertile lowland areas, the milk produced by cows in lush dairy country and in upland areas the grass fed cattle and sheep that produce some of the finest beef and lamb in the world (OK, I’m biased but hey, if you’ve eaten slow grown Welsh lamb or beef you’ll know what I’m talking about ;0). Agriculture is basically about harnessing the power of the sun as it channels up through the biological systems on earth and harvesting them for human use.

Grassland management for livestock is more scientific that you’d think. It’s not so simple as to say “animals eat grass, we eat animals” in some neat little linear food chain. Different herbivores graze in different ways depending both on their physiology and their anatomy. The different kinds of vegetation required is dictated in part by the digestive system and by how the species or breed has evolved to fit it’s habitat. Different dentition changes the way that grazing animals eat the same grasses and so the very best way of grazing land is to have several different species eating from the same patches of pasture – just as nature does in the wild where many species coexist to take advantage of their individual needs that mesh together in symbiosis. Farming systems that rely on a single species only can lead to an imbalance and therefore more human intervention is required to maintain the optimum health of the pasture and the animals. Often Organic systems or ones based on Permaculture seek to find ways of harnessing natural systems to work together with people to create a harmonious ecosystem even in artificial set ups like an enclosed farm, smallholding or garden.

This isn’t always possible for practical reasons. Not all animals suit all kinds of land, there are other constraints such as time, skills set or simply financial limitations on what livestock you can keep in a given area. This has certainly been true for us here on our smallholding where we’ve tried keeping most farm animals over the years but as time has gone on, other factors have required us to cut back on what we do or attempt. Whilst it’s nice to cut back on the complexity of work, it’s also sad when a holding slowly empties of the stock that is its raison d’être.

In the past couple of weeks however Chez BlackSheep has filled with more life than we’ve seen for a long while… and whilst most of it is temporary, it’s heart warming. The aforementioned triffid-like grass is far too much for our small flock of sheep, 4 geese and one old pony to keep on top of. Just as living in the country seems to be about spending six months of the the year preparing for the other 6 months, so grassland management for livestock falls within that same pattern of work. Once the day length starts to pick up as we move away from the Spring Equinox and there is less rainfall and the temperatures start to rise, the animals rely less on feed taken to them and start to graze more comfortably on the pastures. They put down fat, spend more time lying down cudding and even in the case of some younger animals, they play in the evenings too.

This is one of the things I love to look out for; when my sheep start acting like goofs in the late Spring evenings I know that the grass is starting to grow properly. The saying goes “every baa misses a bite” – meaning that time and energy spent on other activities is time wasted on grazing. When there is little grazing, sheep keep their heads down moving constantly, nibbling urgently at the pasture getting as much as they can from the sward so they can then go and find somewhere to lie down to cud and digest what they’ve stored in their rumens. When there is plenty of grazing it takes less time to “tank up” and with more protein and sugars available the easier it is for them to get the required nutrition. There are advantages and disadvantages to both, however once the Spring grass starts growing there is a happy medium when there is sufficient before lush growth starts to cause potential problems with imbalances  with parasites and nutrition.

Sheep, like cows and goats amongst other ruminants, have no top teeth at the front, just a hard gummy Dental Pad that meets their lower incisors. There is a gap between this and the premolars and molars at the back of their mouths – this gap is called a Diastema. Sheep graze by nipping off short grass with their incisors and dental pad and swallowing this down into their first stomach or rumen – a large sack filled with microorganisms that breaks down indigestible cellulose. Ruminants like sheep then regurgitate this back into their mouths to “chew the cud” whilst they are resting to grind it down with their molars into smaller pieces to be digested further. Cows are also ruminants but use their tongues to wrap around long grasses and rip it off so eat different lengths of grasses to sheep. Working together cattle and sheep graze pasture more effectively than one of the species on their own.

Horses are not ruminants; they are known as hind-gut fermenters as they have an enlarged caecum (like the appendix in humans) towards the end of their digestive system and this aids breakdown of the indigestible cellulose there. They also have different dentition and have incisors at the front of both top and bottom jaws. They graze by nipping off shorter grass and chewing it before swallowing.

Goats (of which we have only one now) are more browsers than grazers, they prefer to graze on tougher more woody herbage such as twigs, shrubs and leaves of trees as well as dicot plants in the pasture. They have similar dental and digestive structures to sheep however and share most of the same parasites and aren’t great to graze alongside sheep for that reason.

Pigs are omnivores; they eat anything! (well almost anything) and have an impressive dental toolbox to match and can tackle most things that come their way that other animals would find inedible. My pigs are Large Blacks which are a traditional breed that does well outdoors on non-intensive systems and they like grazing and do better on low input systems than commercial pigs including garden waste and pernicious weeds from the veg plot (but it’s no longer legal to feed them kitchen waste). So they do like grass and in winter, hay. But they do better on longer grass as short grass is an open invitation to do what pigs do best – dig with their amazingly strong snouts for roots, invertebrates, rhizomes and other delectable piggy delights and a determined pig can wreak an incredible amount of upheaval on pastures… as I learned to my cost over the years!

In summer we shut off fields to grow the grass long to cut and dry for hay. This gives stored feed for the animals during winter months when the grass stops growing and the weather means they have to be housed and/or fed supplementary foods to survive. Last year we made enough superb quality hay to last us for 2 years – the traditional/primitive breeds we favour and the low demands we make on them mean they can cope better with lower levels of nutrition and even thrive on bulky foods so this works for us in a way it wouldn’t on intensive farms where protein content is vital.

However this year that leaves us with the conundrum of what to do with all the grass that would normally be shut off from livestock to do turn into hay. All of a sudden the grass growth shoots away and gets too long for sheep to graze effectively. So the only way for us to manage this superabundance is to draft in a little extra munch power. Some of a friend’s cattle are currently dealing with the longer grass over the summer months. 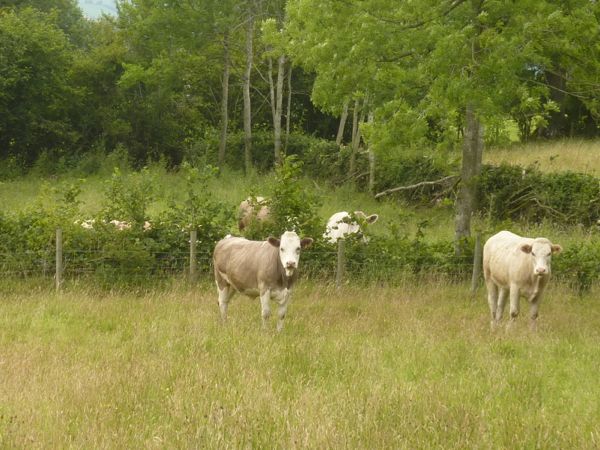 Petunia the pig has come home after spending the first part of this year on loan to another friend.

I didn’t have time to manage pigs with other things in my life so the deal was that she would produce piglets which they’d keep in return for looking after her for a season or two. Sadly she has failed to get pregnant so she’s come home for one last attempt here as at home she’s kept outdoors which suits this breed better whereas at the farm she went to on loan, the pigs have to be kept in large airy barns. It’s a system that works well for lots of breeds of pigs that wouldn’t manage outdoors so well but for hardy breeds like Large Blacks they are happier with the wind in their hair and the sun on their backs. She had a nice holiday getting tubby on her “all you can eat inclusive package” so now she’s on a grass based diet that she has to go and pick for herself in the hope that it will slim her down, excess body fat being a real hurdle to fertility in most species but especially pigs.

Hopefully this handsome Hampshire boar can persuade her to start a family again!

Yet another friend has needed to find new livery to keep her pony; happily she asked us and as we already have a Welsh pony that needed some company that worked out well.

And for emergency levels of lawn mowing you can’t go wrong with a tight flock of dry ewes to bite the grass down quick… which means that you currently can’t get a blade of grass between the large flock of borrowed sheep “at tack” being moved on from small area to small area every day! This is the ovine answer to Mountfield mowers…

It’s a bit like a big house party where guests are bedding down in all sorts of funny places and using anything they can find to drink out of – it’s fun whilst it lasts even if you know it isn’t like this normally. Happily there is plenty of grub to go around though so at least for the moment, the grass really is greener on this side of the fence!